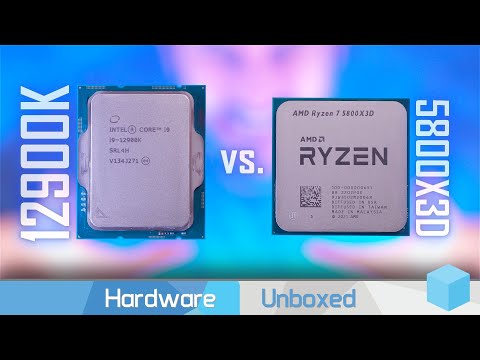 The battle for the best CPU for gaming is on. AMD’s hot new Ryzen 7 5800X3D and Intel’s Core i9-12900K are two CPUs with very different approaches to high-end gaming performance, but both are equally impressive.

With eight cores and several hundred dollars separating them, it might seem like a foregone conclusion which is best. But with their unique hardware arrangements, the title of which is the best gaming processor of 2022 — so far — really is up for grabs.

Intel released the Core i9-12900K in early November 2021 as the flagship of the new Alder Lake generation. It debuted with a recommend price of $589, though it more readily sells for around $600 at the time of writing.

The AMD CPU sports a more modest 4.5GHz boost clock, a 200MHz reduction from the Ryzen 7 5800X it’s based on, while the Core i9-12900K reaches to new heights with a 5.2GHz boost clock on a single core and a 5GHz boost clock across all of them at once.

That additional cache dramatically boosts the otherwise standard specifications to new heights of gaming performance. There are some bandwidth- and latency-dependent applications that could also benefit from it, but it’s games where we’re seeing the largest benefit.

Outside of specs, power is a big concern. The Core i9-12900K draws more than twice as much power than the Ryzen 7 5800X3D, and even more if you overclock it. The Ryzen 7 5800X3D doesn’t support overclocking, unfortunately, though that comes with the upside of less power draw overall.

It’s not perfect, though. In intense open-world games like Red Dead Redemption 2 and Forza Horizon 4, the Core i9-12900K takes a lead with its larger core count. Some open-world titles still favor the Ryzen 7 5800X3D’s increased cache, however, as showcased by Far Cry 6 and Assassin’s Creed Valhalla.

Where the Ryzen 7 5800X3D shoots ahead is in multiplayer. In Halo Infinite, it leads by 12.4%, and in Fortnite, it matches the Core i9-12900K. AMD says the random nature of multiplayer games — think Apex Legends or Valorant — can benefit from increased cache, and our benchmarks back that up.

It’s not just multiplayer titles, either. Our Civilization VI turn time benchmark is a sign of that, showing that an increased cache pool allows the processor to hold more instructions for AI opponents.

Although the Ryzen 7 5800X3D is a showstopping gaming CPU, it’s not great in general processor performance. The higher core count on the Core i9-12900K allows it to run through applications much faster, both in terms of single- and multi-core performance.

That translates into applications, too, with Intel’s CPU showing a 21% lead in Premiere and a 32% lead in Handbrake. If you’re a professional that needs optimal CPU performance, the Core i9-12900K is your best bet, especially considering its platform features.

As much as raw performance, cost, and efficiency are major factors in buying a CPU, you also need to factor in the ecosystem. The AMD Ryzen 5800X3D is running on AMD’s aged AM4 platform, which supports DDR4 memory and PCIe 4.0. In comparison, the Core i9-12900K is based on Intel’s newer LGA 1700 socket and supports DDR5 memory and PCIe 5.0. That not only means it has greater performance potential where memory bandwidth is paramount, but that it can be upgraded to future DDR5 and PCIe hardware (GPUs and storage being the most prevalent) without the need to upgrade anything else.

Intel’s platform will also have one more generation of upgrades in Raptor Lake, whereas AMD’s AM4 is very much on its last legs. It’s still capable and the 5800X3D represents an amazing upgrade path for existing AMD Ryzen system owners, but it’s a harder one to recommend for new builds considering its lack of comparable longevity.

Performant as it is, the Core i9-12900K is a hot processor. During our tests, it peaked at around 86 degrees Celsius, which is right around where the Ryzen 7 5800X3D peaked. However, Intel’s part drew a staggering 240 watts of power during that time, while the Ryzen 7 5800X3D only sipped 101W.

We ran our tests with a 240mm all-in-one liquid cooler, so there’s a little more thermal headroom with an intense cooling solution. Regardless, the Core i9-12900K is a clear loser here. It draws a lot of power as is, and if you overclock it, it will draw even more. The beefed-up Core i9-12900KS is evidence of that, nearing 300W and 100 degrees Celsius based on our testing.

Ryzen rips for gaming, but Alder Lake is a better all-rounder

If you want the best gaming CPU, the Ryzen 7 5800X3D is the cream of the crop. When it comes to the best processors, however, the Core i9-12900K still holds the crown. It comes with much higher performance in professional applications, despite taking a decent back seat in gaming.

The main concern comes down to thermals and power. The Core i9-12900K is a hot chip, and you’ll need one of the best PC power supplies to support it. That’s especially true if you’re overclocking, where even a 360mm AIO can only keep temperatures around 90 degrees Celsius when the chip is pushed.

On the other hand, the Ryzen 7 5800X3D doesn’t even support overclocking. That doesn’t make a huge difference in games, but there are still applications that are sensitive to frequency (including older games). Keep that in mind before picking up the CPU you want.