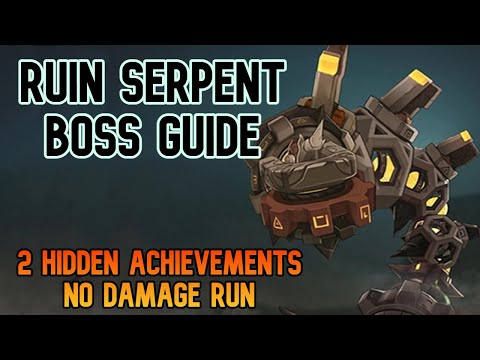 If there’s one thing to know about Genshin Impact’s new normal boss, The Ruin Serpent, is that it moves around a lot. Zu viel. To get to the Ruin Serpent, you’ll need to have access to the underground area of The Chasm and the Surreptitious Seven-Star Seal Sundering quest must be completed. The Ruin Serpent costs 40 resin and also drops the unique Runic Fang item, which will likely be an Ascension material for future characters. It has a set of unique ooze-clearing mechanics, so make sure your Lumenstone Adjuvant is equipped when you’re fighting this boss. The higher your Lumenstone Adjuvant level, the easier this fight is.

How To Beat Up The Ruin Serpent

So there you have it: How to effectively take down the Ruin Serpent. Happy farming! For other Chasm-related guides, you can check out our Archon quest walkthrough guide and The Chasm Delvers walkthrough guide.