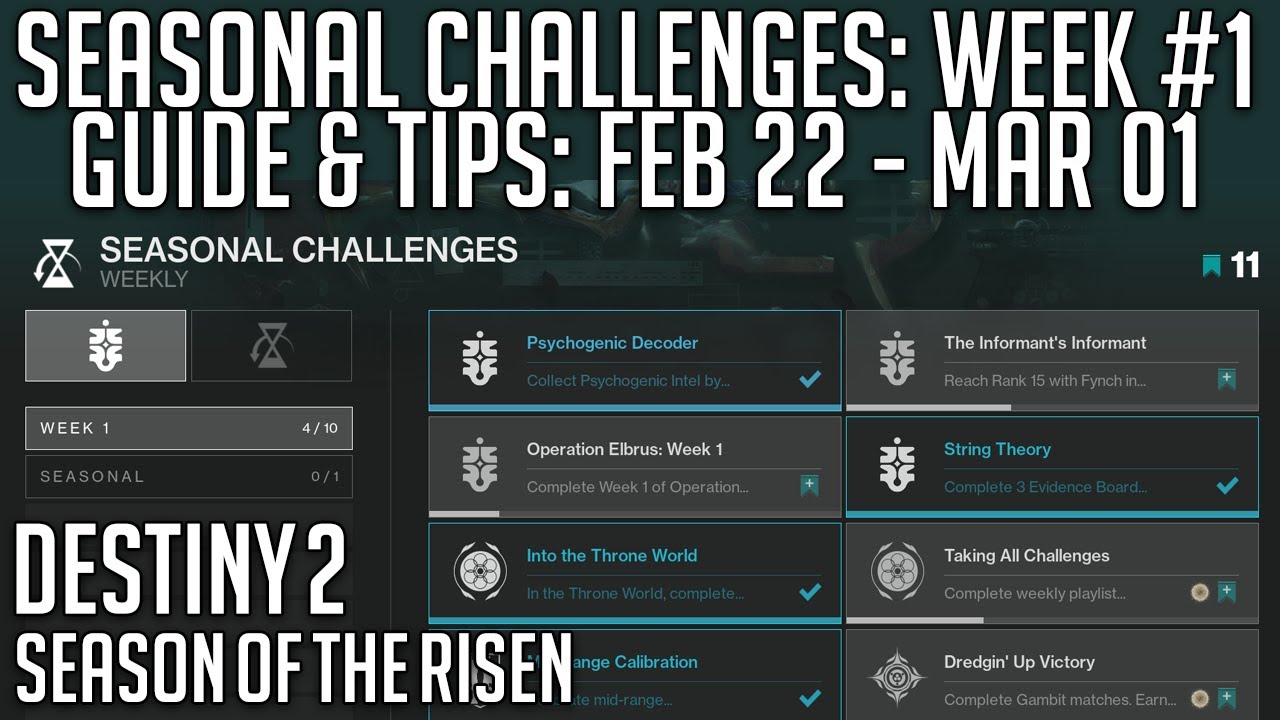 A new weekly reset for Destiny 2 means that a refreshed selection of seasonal challenges are available. This week has a handful of challenges available, ranging from the continuation of the PsiOperative tasks to some target practice with your hand cannons and glaives in Gambit. You can also earn rewards for completing a Grandmaster Nightfall strike, now that the challenging PvE mode has returned.

Completing these challenges is well worth the effort, as you’ll gain a substantial amount of experience in the process. That in turn helps you fill up your season pass sooner, grabbing even more loot in the process. It’s a win-win situation.

Even better, you can pursue these seasonal challenges at your own leisure, as they’ll only expire once a season concludes. If you decide to take a break from Destiny 2 for a week or two, you can return and complete multiple challenges at the same time. For more on the game, you can see what’s still to come in Season of the Risen, how weapon crafting will be tweaked, and the latest Iron Banter column.

Complete any Nightfall strike on Grandmaster.

Complete 3 Evidence Board investigations in the Mars Enclave.

Into the Throne World

Defeat a Hive Warden of the Spring and a Scorn Lightflayer in the Wellspring.

Complete the Exotic quest „Of Queens and Worms“ to obtain a new Exotic weapon.

Lost In The Legend

Complete a Lost Sector on Legend or higher.

Defeat Guardians in the Mayhem playlist with Super abilities.

Complete Week 3 of Operation Elbrus and use Psychogenic Intel to decode three Runic Chests at the end of PsiOps Battlegrounds.

Challenge of the Disciple

Complete a weekly mission from The Witch Queen on Hero difficulty or higher.

Extract a Resonant element from a Deepsight weapon.

Complete each encounter in the „Vow of the Disciple“ raid in Savathun’s Throne World.

Increase weapon mastery for a Shaped weapon, and reshape a weapon.

Complete any Nightfall strike on Hero difficulty or higher.

Defeat Hive and Scorn bosses in Strikes or Vanguard playlists

Masterwork a piece of armor

Acquire the Done and Dusty ornament for Reckless Endangerment.

How Do Seasonal Challenges Work?

Seasonal Challenges can be accessed from the Quests tab in your main menu, which is where you’ll find tasks that revolve around eliminating certain enemies with a specific element, taking part in one of the game’s new activities, or completing a Raid. Each challenge can be completed once per account, and each week will usually add around 10 new challenges which will be active for the duration of the season.

Completing Season of the Risen’s challenges will fulfill the requirements for the Master of All seasonal challenge, which in turn will net you a large Bright Dust reward that can be spent in the Eververse store on select cosmetics, emotes, and items.